Must See Temples In and Around Bangalore

The town of Srisailam is reputed for the shrine of Lord Mallikarjuna on the flat top of Nallamala Hills. It has played a dominant role in the Hindu religious, cultural and social history since ancient times. The epigraphical evidence reveals that the history of Srisailam began with the Satavahanas who were the first empire builders in South India.

Shirdi is a town and falls under the jurisdiction of municipal council popularly known as Shirdi Nagar Panchayat, located in Rahata Taluka in Ahmednagar District in the Indian state of Maharashtra. It is very famous for Shirdi Sai Baba temple.

Baba Budangiri is a mountain in the Baba Budan range of the Western Ghats of India. Located in the Chikkamagaluru District of Karnataka, Baba Budangiri is known for its shrine to the Sufi saint Hazrat Dada Hayat Khalandar, a pilgrimage site for both Hindus and Muslims.

It is a world-famous tourist destination that houses the Sri Sringeri Sarada Peetham, one of the four primary temples of Advaita Vedanta philosophy. The Sarada Peetham was established by Adi Shankaracharya and is considered one of the Shakti Sthalams of India.

Sigandur or Sigandooru is a small village located in Sagara Taluk, Karnataka, India. The village is surrounded on three sides by backwaters of Linganamakki dam formed by Sharavathi River.The place is known for Sigandur Chowdeshwari Temple, which attracts hundreds of people every day. The temple is managed by temple committee.

The Veerabhadra temple is in Lepakshi in the Anantapur district of the Indian state of Andhra Pradesh. Built in the 16th century, the architectural features of the temple are in the Vijayanagara style with profusion of carvings and paintings at almost every exposed surface of the temple. The fresco paintings are particularly detailed in very bright dresses and colours with scenes of Rama and Krishna from the epic stories of the Ramayana, the Mahabharata and the Puranas and they are well preserved. There is a very large Nandi, mount of Shiva, about 200 metres away from the temple which is carved from a single block of stone, which is said to be one of the largest of its type in the world.

Dharmasthala Temple (Kannada/Tulu:ಶ್ರೀ ಕ್ಷೇತ್ರ ಧರ್ಮಸ್ಥಳ) is an 800-year-old religious institution in the temple town of Dharmasthala in Dakshina Kannada, Karnataka, India. The deities of the temple are Shiva, who is referred to as Mañjunatha, Ammavaru, the tirthankara Chandraprabha and the protective gods of Jainism, Kalarahu, Kalarkayi, Kumarasvami and Kanyakumari. The temple is considered unique. Since it belongs to the Shaiva sect of Hinduism. The priests are Shivalli Brahmins, who are Vaishnava, and the administration is run by a Jain Bunt family called the Pergades.

Kukke Subrahmanya is the abode of nagas. Here pooja is offered to lord Subrahmanya merged with serpent king Vasuki. Hence, believed to be the ultimate solace for salvation from any sort of naga doshas. Thousands of devotees come here from far and wide to offer Sarpa Samskara, Nagaprathishta, Ashlesha Bali & other rituals.

Kolluru or Kollur is a small temple-town in Kundapur Taluk in Udupi district of Karnataka state, India. It is situated about 38 km from Kundapur town. This village lies at the foot of the Western Ghats and is famous for the Mookambika temple, a Hindu pilgrim center.

Udupi also known as Odipu in Tulu, is a city in the Indian state of Karnataka. It is the administrative headquarters of Udupi District. Udupi is notable for the Krishna Temple and lends its name to the popular Udupi cuisine. It is also known as Lord Parasurama Kshetra, and is famous for Kanakana Kindi. A centre of pilgrimage, Udupi is known as Rajata Peetha and Shivalli. It is also known as the temple town.Manipal is a locality within Udupi city. Udupi is situated about 60 km north of the industrial hub Mangalore and about 422 km northwest of state capital Bangalore by road.

Murdeshwara is a town in Bhatkal Taluk of Uttara Kannada district in the state of Karnataka, India. Murudeshwara is another name of the Hindu god Shiva. Famous for the world’s second-tallest Shiva statue, the town lies on the coast of the Arabian Sea and is also famous for the Murdeshwar Temple. Murdeshwar has a railway station on the Mangalore-Mumbai Konkan railway route

The temples of Mahabalipuram, portraying events described in the Mahabharata, were built largely during the reigns of Narasimhavarman and his successor Rajasimhavarman and show the movement from rock-cut architecture to structural building. The city of Mahabalipuram was largely developed by the Pallava king Narasimhavarman I in the 7th century AD.The mandapa or pavilions and the rathas or shrines shaped as temple chariots are hewn from the granite rock face, while the famed Shore Temple, erected half a century later, is built from dressed stone.

The deity at the Annapoorneshwari Temple at Hornadu is Annapurneshwari. The main deity of the goddess was put in place by Adi Shankaracharya; the new deity of goddess Annapurneshwari was consecrated in the temple in 1973.Horanadu lies amidst beautiful Malnad at a distance of 330 km from Bengaluru. Distance from Sringeri is 75 km. Direct buses run from Bengaluru to Horanadu every day. Bus services are provided by both KSRTC and private companies. The nearest airport is Mangalore International Airport previously known as Bajpe airport situated in Mangalore

Sri Radha Krishna Temple has deities of Radha and Krishna located at Rajajinagar, in North Bangalore, Karnataka, India. It is one of the largest ISKCON temples in the world.

One of the most famous and powerful of such kshetras is the Sri Mukthi Naga Kshetra, which is located off Mysore Road, within a kilometer from the village of Ramohalli, five kilometers towards the Dodda Alada Mara (Big Banyan Tree), and 18 kilometers from the Bangalore bus stand.

This temple is known to many devotees of the Lord Anjaneya in Bangalore by the name “Gali Anjaneya Gudi”. Gali means air and Gudi means temple in Kannada language. This could mean two things firstly because Lord was in Digambara temple originally hence Gali Anjaneya. Secondly since he is son of wind God Vayu hence Gali Anjaneya (Vayu sutha).

Dodda Basavana Gudi is situated in Bull Temple Road, Basavanagudi, area of South Bangalore, part of the largest city of the Indian state of Karnataka. The Hindu temple is inside a park called Bugle Rock.

Hanuman is the very embodiment of Bhakthi, “The Bhaktha of Bhakthas”. His adoration of the incarnate divinity of Rama is absolute. A very popular god among the rural as well as among the urban folks. He is worshiped for various benefits: health, wealth, happiness, fulfillment of desires, success and magical accomplishments. The history behind the name of the temple is as fantasizing as Hanuman Leelas. It is believed that a big heap of Ragi (a food grain) turned out to become a stone, hence the name “Ragigudda”. At the time of incidence The Thrimurthies, Lord Brahma, Vishnu, Maheshwara who visited the place, wished to stay there permanently changing themselves into 3 big stones pillars. Their presence here stands as a witness to all the developments so far, and for the future developments. 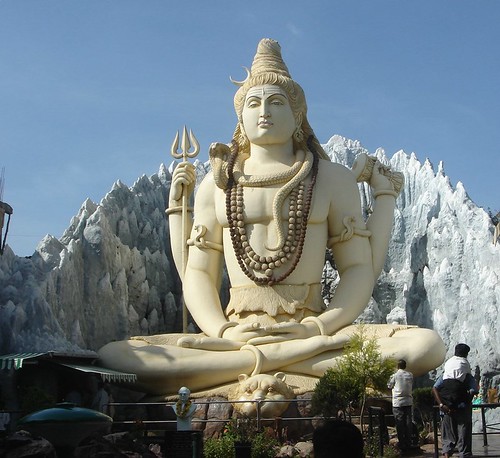 The Shiv Mandir, located in the heart of Bangalore, is abode to a 65-feet-tall Shiva statue. Seated in a yogic posture, the deity is a towering symbol of faith. Lakhs of devotees throng the temple to experience God, especially on festive days. The majestic Lord sits in a lotus position, and has in the background Mount Kailash, and the holy river Ganges flowing from the His matted locks. The sense of tranquility that one experiences by looking at this 65-feet marvel, surrounded with mountains and with the blue sky above, is overwhelming. The look on Lord Shiva’s face is so serene that it calms anyone who looks at him. The positive energy that exists in the place is overpowering. It is a feeling that one must experience in his / her lifetime.

Shree Surya Narayan Swamy Temple situated at Bangalore in Karnataka India . is one among the few Sun God Temples in the world. The temple attracts thousands of devotees every day , besides on fairs and festivals which is conducted on Magha masa sudha trithiya, The temple is situated in heart of the Bangalore city with easy access by road, air and at the distance of 3 Km from Airport.

Banashankari Temple is one of most famous temple in Bangalore. It is an aspect of Maa Shankti.

This cave temple dedicated to Shiva in Bengaluru is a well visited temple. Built in the 16th century AD by Kempe Gowda, the founder of Bengaluru, Temple Gavi Gangadhareshwara is an architectural marvel that attracts the faithful by the hordes. One of the oldest temples in Bengaluru, Gavi Gangadhareshwara temple was built by Kempe Gowda in recognition after being released from prison of five years by Rama Raya. There are other idols inside idol Agnimurthi including having two heads, seven hands and three legs. Those who worship this deity believe will cure one of the defects of the eye.

All of us are aware of the greatness of mother Supreme Sri Mahalakshmi the universal Mother Goddess,the giver of wealth, health, happiness and emancipation.Sri LAKSHMIDASA BHAGWAN, the first disciple of Sri Mahalakshmi, built this Mahalakshmi mandir during 1980 and performed “Kumbhabhishekam”.The mandir attracts a large number of devoteed from all parts of India. It is one of the most beautiful temples in Bangalore and every visitor to this city should visit this mandir & get blessing of Godess Sri Mahalakshmi.

Jagannath Temple is a temple dedicated to the Hindu god Jagannath Located on Sarjapur Road in Agara in Bangalore.its main festival is the annual Rath Yatra, which sees more than fifteen thousand worshippers.

Omkar Hills is an area in Rajarajeshwari Nagar in South Bangalore. It includes one of the highest points in Bangalore.

The main attraction is the Multiple-Faced Subramanya swamy which is located in rajarajeshwari nagar.

Panchamukhi Ganesha Temple is located in Mysore Road which is 5 Faced & 30 Feet Idol from ground level.

Kote Venkataramana Temple is a Hindu temple in Krishnarajendra Road dedicated to the god Venkateshwara. The temple was built in 1689 in Dravidian and Vijayanagara style.

Shri Mahavira Digambara Jain temple is located in the Dewan’s lane of Chickpet area has an idol of Mahavira in the Kayotsarga posture. The idols of Parshva, Bahubali, Vimalanatha, Anantanatha and Brahma Yaksha are seen in this temple. A guesthouse for pilgrims, Mahavira Bhavan, Ahimsa Derasar and a well equipped library containing the books on Jainism are part of the temple complex.

Shri Adinath Digambar Jain temple is a new temple built in Jayanagar, a suburb of Bangalore. The temple is built in white marble with colourful shades. The entrance gate is a nicely sculpted. Two white marble elephants are at the foot steps of stairs to reach the main temple.

The first Sikh Gurudwara and the largest in Bangalore near the Ulsoor Lake on the Kensington Road, is an elegant and white structure.The large prayer hall accommodates about 500 devotees at a time. Special prayers are offered every Sunday. The temple wears a colourful look as special prayers are offered and more than a thousand people from all religions come here to worship. The Sri Guru Singh Sabha which manages the Gurudwara also runs a school, a medical centre and a function hall also provides accommodation to the tourists.

Shri Nimishamba is incarnation of Goddess Parvathi,the consort of Lord Shiva. This is considered as holy place.God will remove all problems and troubles of her devotees within in a minute.Thats why she is called “Nimishamba”.

Chikka Tirupati or Venkateshwaraswamy temple is dedicated to Hindu god Vishnu located in Chikka Tirupathi, Malur Taluk, in the outskirts of Bengaluru in the South Indian state of Karnataka. Constructed in the Dravidian style of architecture, the temple is considered similar to the Tirupathi Venkateswara temple. Vishnu is worshipped as Venkateshwara and his consort Lakshmi as Alamelumangai.